The State of Mind engl. - alexanderbolz-film

The State of Mind engl.

"The State of Mind"
Treatment

„The self, having overcome all its misfortunes,
No longer burdened by age, death, grief, hunger, thirst,
Truthful in its longing and true in its decisiveness –
This is one ought to seek and strive to apprehend.
The universe and all his wishes gain he who finds and sees.”

The motion picture „The State of Mind“ is dealing with a process of search and apprehension.
The setting of the story is contemporary Rome.
The main male character is Adriano Sordi, a man in his early forties. We do not know where he came from, but he is familiar with the town.
The main female character is Nicole, a young Dutch woman, who is staying in town for a short time only.
As minor characters figure Carla, maid-of-all-works in Sordi’s hotel, an African who has aged early due to being a single parent, the part-time chambermaid Rita, and a boy.
The film has a duration of about ninety minutes.

Adriano Sordi has come to Rome. He knows the town well and feels very much at home there.
He is living in a cheap hotel. The ambience is as archaic as his life.
Reading on his bed while enjoying red wine and cigars, he seems to be settled and quite at ease. Yet, he is a driven, searching character.
Not knowing exactly what to look for, he hopes to find both question and answer in the streets. But the more he walks the town the more his self-assurance dwindles while his doubts grow.

Sidelights of his wanderings:
In a bar, drinking cappuccino, he follows the ceremony of espresso-making.
A large place, heavy traffic, with five streets diverging. Where is he to go?
Fascist architecture: the bas-relief of a thinker of stupid brutality.
A small open market. Stalls. Pupils and students. Employees from nearby offices dropping in for a snack during their lunch break.
A gloomy backyard with a ravine-like passageway which he is following.

Easter 2005. Sordi is in his room. As it happens he is watching the celebrations on TV:
Pictures of the Pope, fatally ill, following mass on TV, are being shown on a large scale screen where the faithful on the Place of St. Peter can see them. Sordi has just taken a shower. Still naked he is watching an event that leaves him indifferent, because his inside is locked up. Therefore he switches of the TV. He walks out of the frame, into nothingness.

Gleaming lights of rows of cars on a splendid street. An evening in the town. Prestigious shops, sauntering people. Sordi enters a bookshop. A temple of books with high stuccoed ceilings. He is browsing the philosophers’ shelf. Vainly he is looking for help there, because life exceeds pure reason.

Sordi’s decent into the bowels of the town. A real nightmare. Escalators leading down to bunker depths. Curving tunnel shafts. Nineteen-seventies concrete brutality. A subterranean supermarket, a parking space. People resembling mannequins are passing by on conveyor belts like ghosts. An endless, stifling labyrinthine netherworld without escape.

The nightmare accelerates. A commuter train speeds Sordi to the sea. There, on a jetty, the crisis escalates into panic. It dawns on him that instead of progressing he is in danger of ending up in a blind alley. His fear becomes unbearable. His attempt to fight it with alcohol fails.
In despair Sordi is running across dunes on the beach until he collapses in the dust, com-pletely exhausted.
Then, again looking at the sea, he eventually finds a trace of confidence, though he doesn’t know yet what there is to come.
Exhausted and alone he takes a swim in the sea, plays with a stray dog on an empty beach.

A few days later Sordi is watching the dying Pope on TV. Now his distance diminishes. In addition to just witnessing the event his inner self, too, participates. He is now deeply touched and no longer a mere spectator. He comes to recognize that the blind alley is a manifestation of his resistance against being a Christian, against life itself.

He dares to take the next step. Sordi is ascending a path up a mountain with a church on top. Sordi enters the church.
Sordi, standing in a slaughterhouse, surrounded by cages, cattle, chaos, it is loud, an animal is butchered.
Sordi putting his head on a rail, a train approaching at tremendous speed.
A small boy, stretching out his arms forward, waiting in fear. A stick slicing the air, hitting tender fingers, a face drawn in pain.
These tree scenes are rushing by, separated by hard cuts.
Next, we see Sordi in the church. Silence.
Sordi taking in the scenery, looks up, walks around slowly. He opens himself up to the aura of the place. The crucified Jesus. A thousand burning candles underneath the cross: A golden sea of light.  Feeling calm and sheltered he lights a candle under the cross.

Intermezzo: After his exhausting marathon Sordi regains his strength. He finds peace, having taken the decisive step which had cost him so much effort. He takes a stroll in the extensive park of the Villa Doria, high above the town. His view is directed over the town towards the Alban Mountains.

At a bus stop Sordi meets a young woman.
Now he is again open for life, open for the world, for people.
His turning to religion gains yet another dimension. The lonely introverted stray does not become a monk. On the contrary: His aye for faith is an affirmation of life. Again he is able to feel love – for a woman, for life.
He likes the woman at first sight. Her name is Nicole. She is from the Netherlands and will stay in town only for a short time. He accosts her and they get acquainted.
Nicole returns his affection. She falls in love with Sordi. They spend their days together, together they sit in cafés, drink wine and take strolls along the banks of the river Tiber, where they ponder living together.
Crossing an old bridge they reach the island. Quickly the river is rushing by below them. There, in the night, all alone on the island, surrounded by the roaring town, Sordi and Nicole find each other, dancing.
But Sordi doesn’t go with Nicole into a shared future. Letting her depart, he remains on his own to follow his own path.

In Sordi’s Hotel Carla is employed as a maid-for-all-work. Being a single parent she has aged early. Accidentally Sordi learns that one of her kids is in hospital afflicted with a severe malady, while she lacks the means to help him.
Without much ado he gives away all his money. He doesn’t need it any more, for he has liberated himself from that, too. One more step on the search for the true self.

On his last evening in the town Sordi is sitting outside a bar on a piazza in one of the old districts. He is drinking wine, smokes a cigar and follows the bustle of the lively nocturnal place: people passing by, customers at other tables, boys playing football, frolicking dogs; someone drinking fresh water from a well with his cupped hands. Now Sordi experiences himself to be a part of the whole, he is sheltered and in harmony with it.
Late he returns home. He is alone in his room. It’s night. Now he has arrived. This he is writing down in his diary. Then he is dancing on his own.

The next morning he is found by sunlight, fresh and pure. Sitting on the bed he is loading his gun. Then he enters the bathroom. The report of a gun off-stage. Excited voices in the corridor.  Staff, other guests hammering against the locked door.
In a doubling Sordi is looking at himself: Holding the gun he just fired he is looking at himself lying on the floor of the shower.
Then he is leaving the hotel without any luggage.
The camera is following him stepping onto the trottoir. He is walking down along the street.
He rounds a corner and is gone. 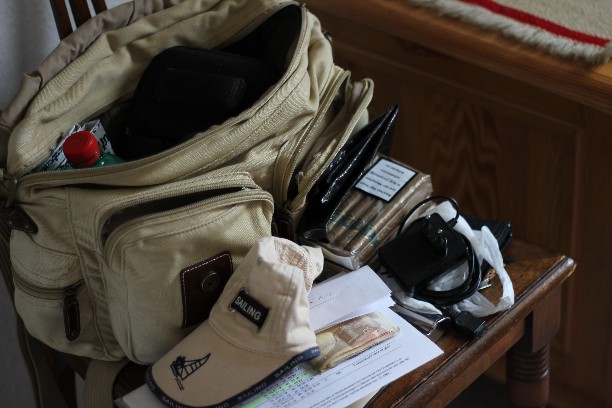 „The State of Mind“ – Turning it into a motion picture:

The film is centred on one person, Adriano Sordi. His movements around the town symbolize his inner commotion, his inner progression.
The Film “The State of Mind” is about the active process of a person’s maturing, his looking for and eventual finding of truthfulness. It is borne by the language of its images and the art of seeing – being very much in contrast to television’s empty babble.

Film has a special ability to give access to the intrinsic nature of both characters and places. Therefore it’s the ideal medium for adapting this story of contemplation for the screen.

Dialogue is drastically reduced to the basic necessities of communication, thereby reflect-ing the inner state of the protagonists.
All essentials are expressed by gestures, mimic arts, and the specific visual language of the camera.
Certain passages are additionally supported by Claude Debussy’s piano music.
When Sordi and Nicole meet these methods of expression unite: The dialogue, conveying the mutual spirituality with the music, which supports the coming together of the lovers in a choreographed dance.

„The State of Mind“ is about a process of search und recognition.
The basic mood of the film is positive.
It’s not a film about a suicide. The “suicide” merely serves as a dramatic frame, symbolizing that becoming a fully fledged person is not the result of a stroke of luck but requires active work on one’s self.

It is a full-length motion picture of about ninety minutes. It is intended for the cinema.